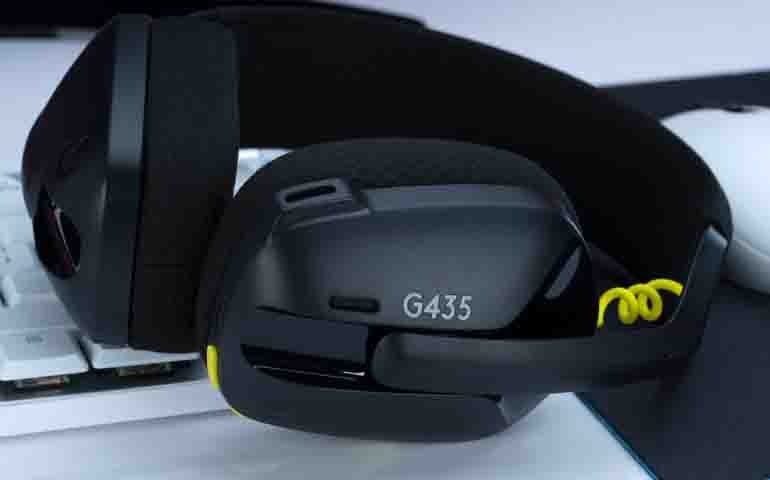 Logitech introduced a new model of wireless gaming headset last fall, radically changing the design concept in it. Headphones have a shape that echoes the previous generations of devices in the G series, but received a number of features. We will tell you more about the G435 in this review.

The Logitech G435 is a gaming headset based on over-ear headphones. It seems minimalistic in terms of design, perhaps even too utilitarian. However, this is a misleading notion.

Yes, we decided to keep the number of parts to a minimum. Therefore, the speaker cups are essentially directly attached to the headband. Usually there are still one or two connecting elements. The continuation of the headband smoothly passes into the guides on the outside of the headphones. The spiral cable connecting the filling and the halves of the headphones has sufficient elasticity to stretch at the maximum selected position.

The body of the earbuds is made of plastic, of a regular texture, resistant to light scratches and not too slippery. If you feel the headband, you can feel the frame of a simple design of two parallel plastic arcs and a pair of crossbars between them. In practice, this is enough to keep the shape and survive a slight twist.

The headband is covered with a fabric of the same texture as the ear pads, but unlike them, it does not have perforations. Minimalism has reached the inside of the cups - no fabric or foam layers. We see a plastic grate and the insides gleaming through it.

The main advantage of these headphones over many other models are fabric ear pads. It is not necessary for marketers of companies to talk about the greater reliability of leatherette. In hot weather, leatherette covers are a living hell for users who cannot turn on the air conditioner for fear of catching a cold. Or if it is simply not there. Therefore, in addition to a towel on the same leatherette chair, next to the mouse is a cloth for wiping the ears and head around them.

As for reliability. In our review, four out of five full-size earbuds had cracked or chipped ear cups in 2 years. They "lived" in the editorial office, were not used on the street, did not lie in the sun for three days. The fifth earbuds, whose ear pads remained in approximately the same condition as after the purchase, were the Koss UR20. They began to climb after five years of use at home, on the street, in the hall, as audio monitors at the university disco and other activities.

What did all this savings and radical rationalization give? Logitech G435 turned out to be very light. On the head, it is barely felt. We spent three to four hours or more playing games and watching movies without feeling tired at all.

In the story about this model, it is impossible not to mention the possible colors. There are three of them, and they differ radically in style and degree of extravagance. Obviously, they tried to play with them in contrast, for the same different audiences and wardrobe styles. Although it can be said that electro, punk, cyberpunk, to a greater extent, prevail in all three.

By the way, 22% of the parts of this headset are made of recycled plastic. The packaging contains recycled paper, paper cable twists. In general, the headphones are not only cute, but also УusefulФ to the planet.

To control the end of the left earpiece made four buttons. The top is responsible for turning on and off. The middle two are doubled, they adjust the volume, and the bottom one turns the microphone on and off.

Their layout is quite logical. The power supply is only slightly removed from the rest in order to press it accidentally "smaller". The headset will automatically turn off after ten minutes of non-use. So the power button should have been further away to avoid false clicks. It will be easy to tactilely raise or lower the volume, the button is almost on the very corner. Well, the activation of the microphone will not turn up under the finger, because it is installed Уaround the cornerФ from the previous ones. Near it, in the middle of the end, there is a USB Type-C port for charging.

You can connect your gaming headset to your PC, smartphone or other devices wirelessly. This is done either with the help of proprietary technology LIGHTSPEED, or Bluetooth. The headset will not work only with a connected cable, you need to insert a transmitter with it or pair it via Bluetooth. The LIGHTSPEED receiver can be used with Windows computers, MacOS or PlayStation 4 and 5 consoles.

The headphones have 40mm drivers. The audio part is certified for use with the Discord service. It also talks about compatibility with a number of frequently mentioned technologies like Dolby Atmos. Really liked the sound. It is balanced, not unnecessarily УtransformedФ into lows, although shots, oz-oz of soundtracks and other special effects sound richer than they should be for a flat EQ. But this is a gaming headset, and not purely for music, so its setup is done optimally.

Since this is a headset, it is equipped with two microphones. One is responsible for recognizing ambient noise and filtering it out, and the second is for transmitting the user's voice. We have already seen this combination in specialized audio devices for call centers. Both microphones are located on the left side. Conversational - in the growth on the end of the body, and recognizing noise, in the side of the cup.

The declared level of autonomy is 18 hours. That is, almost two days of use as a headset for online calls at work, a couple of hours in games at home and an hour or two for music on the road.

Headset Logitech G435 surprises with its minimalist design, colors, if you suddenly chose not black, and then equipment. In such a utilitarian, at first glance, case, a good sound was realized. It certainly isn't very deep with a well presented scene and that's it. But from a large number of basses, the dynamics do not lock and the averages do not turn into a mess. For everyday listening to music, online communication and of course games, this device is perfect. Headphones are very ergonomic, functional and have good autonomy. And to top it off - do not scare the price.