The realme 8 review: a worthy continuation of the series 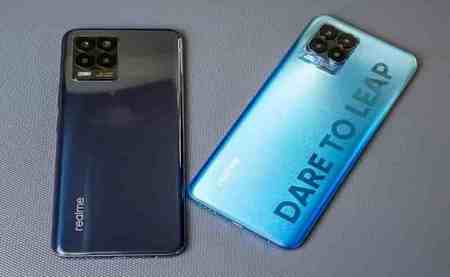 "The eight is noticeably smaller, thinner and lighter than the realme 7 - and with almost the same screen diagonal. The reduced bezel makes the 6.4-inch gadget feel less bulky. In fact, the realme 8, with its 20:9 aspect ratio, is comparable in size to many of the 5.5-inch 16:9 displays.

One of the realme 8's greatest strengths is its extremely pleasing FHD+ resolution display with DC Dimming technology. Even at minimum brightness, the matrix does not tire the eyes with flicker. The screen pleases with all the features typical of Super AMOLED technology: deep blacks, high contrast, rich colours. The peak brightness is 1000 nits. When you activate the interface with a white background, this figure is enough to make the text on the phone readable in direct sunlight. The display refresh rate is standard - 60Hz. But the refresh rate of the touch layer has been improved: in gaming mode it is as much as 180 Hz. The under-screen fingerprint scanner does not disappoint either - it works quickly, without misfires.

The display has few options: a blue filter, saturated and standard colour modes, a dark preset for the interface and applications are available. The smartphone supports a simple screen saver with the clock and notifications. It is not yet possible to fine-tune it, but perhaps with updates such functions will be added.

The in-house software offers quite a few useful settings. There's a night preset, AI-assisted automatic image enhancement, astro photography, fully manual modes for stills and video, effects for portrait shots, RAW format support and much more. Another good thing is that there is a working GCam build for realme 8.

After trying out the novelty cameras, you realise that even a mid-range mobile phone is capable of delivering a pretty good picture. Portrait shooting with different bokeh effects is available for the main module. The same mode at the frontal blurs the background easier, but offers more options retouching.

The maximum quality of video recording is 4K at 30 fps. In this mode you get the most detailed video, but do not have the opportunity to switch on stabilization. It also allows you to shoot 1080p at 60 fps. The digital stabilisation of the realme 8 is available in two options: simple and enhanced. Both options formally work in Full HD, but the difference in image quality at the output is very different. The first has a weaker stabilization effect and a smaller angle of view, but produces a sharper picture. In the second, the frame is better stabilised and the viewing angle is larger, but the overall detail suffers greatly.

From the test clip below, you can assess the quality of day and night photography. An important advantage: the Eight, unlike many competitors and predecessors, writes audio well. At last, the atmospheric noise of the city and individual phrases of passers-by can be heard clearly.

Slow-motion movies are recorded in Full HD without any time limit, but there's no sound. It is also possible to shoot simultaneously on the front and main camera.

The novelty works under the Android 11 OS, on top of which the realme UI 2.0 shell is installed. Enjoyed the various customization options: for example, you can change the colours of the main elements of the interface, load third-party sets of icons from Google Play, and choose the shape of the buttons in the curtain. There's support for double-tapping the screen on and off, as well as other useful gestures.

The whole system cloning feature is extremely handy. For example, it is easy to hide all personal files at any time. After entering a special password a blank copy of the operating system is loaded - useful for testing unfamiliar software in isolation from your data. Or let someone else use the smartphone. Another nice touch: facial unlocking works well in almost any lighting conditions except in complete darkness. NFC doesn't let you down either - payment via Google Pay goes smoothly at retail outlets and cafes.

The realme 8 interface is smooth and lag-free, the response to actions is almost instantaneous. The Helio G95 processor with a Mali-G76 graphics accelerator allows you to play at high graphics settings in PUBG with a stable 29-30 fps, and in "tanks" - with 28-60 fps. In World of Tanks Blitz, the framerate is high most of the time, but occasionally drops to 28fps during fierce battles.

The multimedia features of the device, on the other hand, leave mixed feelings. The speaker produces a loud mono sound, but its quality is neither bad nor outstanding. The situation is similar when listening to music with headphones through the audio jack: the volume margin is not bad, but the sound quality is average. This is partly compensated for by the built-in software equaliser.

Although the size of the realme 8 is compact, a 5000 mAh battery is housed inside. It comes with a 30watt quick charger, which takes around 1 hour and 11 minutes to charge up the battery once it's empty. The eight's battery life is excellent. With a constantly active AOD, the smartphone lives on average about two days. That's about 8 and a half hours of active screen time on a balanced battery life preset. Shooting PUBG in best performance mode drains the device by 12% per hour. And a looping FHD movie the device plays for 16 hours (air mode, maximum brightness).

There are few good alternatives to the realme 8 in the affordable class. The novelty offers a Super AMOLED screen with DC Dimming support, decent battery life and performance, enough for comfortable gaming in PUBG or WoT. Other advantages of the smartphone include small size, in-screen fingerprint scanner, NFC, unusual design and support for fast charging.

The smartphone has already gone on sale in a 6/128GB package at a special promotional price of 20,990 roubles in black and silver colours. The recommended retail price for the realme 8 will be RUB 23,990.