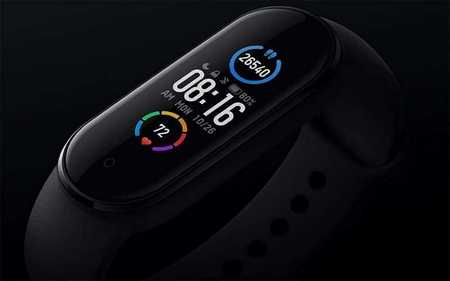 Xiaomi is gradually moving away from the brand image of cheap electronics: its gadgets are becoming more expensive, but at the same time get advanced features. The trend is strongest in the smartphone segment, but other devices are not left out either. The new Mi Smart Band 5 is better than its predecessor in almost everything. Here's a look at what's interesting about the fitness tracker.

Before taking a closer look at the current version of the Mi Smart Band, let's find out how it differs from the fourth generation, which was quite popular. The list turned out to be impressive:

11 workout modes instead of 6

Despite the Mi Smart Band 5's long list of improvements, its appearance has changed minimally. Even if you put the two generations of devices side by side, it's not easy to spot the difference. If you want, you can insert the new bracelet into the strap from the previous version. Admittedly, there is no complete compatibility, as was the case with Mi Smart Band 3 and 4 - there will be a noticeable gap, but the general proximity of design and dimensions is evident.

The company's engineers have managed to fit a larger screen into a similar body. Its diagonal has grown from 0.95 to 1.1 inches, and its area has increased by about 20%. The resolution, which in the new model is 126x294 pixels, has also been tightened up. It didn't do without a downgrade either. So that the display of increased size does not affect autonomy too much, the colour depth was reduced from 24 to 16 bits. However, you won't be able to notice this simplification without a picky comparison with the Mi Smart Band 4 - the difference is obscured by the small size.

The division into two versions according to the presence of NFC remains: for now, Xiaomi is in no hurry to abandon the basic version, which is devoid of the corresponding module. It's the one that's now available in official Russian retail. Those wishing to get an advanced modification will have to wait a while or look for a Chinese version. Mi Smart Band 5 with NFC can be distinguished from the conventional one by the icon on the touch button under the screen. Like the fourth generation, the NFC modification has the letter U on it, while the base model has a circle.

Charging in a new way

Despite all the tweaks Xiaomi has made to the design of the smart bracelets every year, the charging method hasn't changed since the first generation. In this regard, the release of the Mi Smart Band 5 was a landmark event. The Celestial brand has abandoned the usual "bathtub" in favour of magnetic charging - now there is no need to remove the bracelet capsule from the strap every time. By the way, owners of the "Five" will have to charge the accessory somewhat more often than the owners of the "Four". The reason is the reduction of the battery capacity from 135 to 125 mAh. At the same time, the claimed battery life has also decreased. While for the Mi Smart Band 4 without the NFC module the manufacturer promises up to 20 days unplugged, in the case of the current generation this has been reduced to 14 days. Our test sample was losing around 10% per day, and that's with notifications enabled and continuous heart rate and sleep monitoring.

The main app for interacting with the smart wristband is still Mi Fit. To pair a new device, you need to tap the appropriate button, select the type of gadget, wait for the system to detect the tracker, and confirm pairing on it. From then on, you can use the Mi Smart Band 5 without any restrictions.

The mobile utility's main screen is entirely dedicated to tracking the wearer's physical condition and monitoring their workload. The second tab contains a social component: you can add friends, share information about activity and sleep quality, as well as monitor their progress. Finally, the third display gives access to settings related to the operation of the bracelet, the app and the user profile in the Xiaomi ecosystem.

Customisation enthusiasts will also find a shop there with a huge number of watch faces, which are replenished periodically. The fitness tracker also allows you to change the widgets on the home screen. The default settings are a step counter and heart rate, but there are over a dozen options for the user to choose from: from a trivial list of active alarms to a weekly physical activity index.

Another new feature of the Mi Smart Band 5 is the remote camera shutter function, which can easily be used in a variety of ways. Of course, the standard options are also in place: controlling the audio player, broadcasting smartphone notifications, setting alarms and the like.

Sport, you are the world!

For many, a smart bracelet is primarily a tool for tracking workout performance and monitoring health-related parameters. By version five, the Xiaomi bracelet has learned to work with eleven types of activity, including rowing and yoga classes. In addition to standard metrics like heart rate and calories burned, there are metrics unique to each activity. In the case of the aforementioned rowing machine, the accessory documents the pulling and recovery time as well as the rowing pace. In the case of walking or jogging, however, the bracelet counts the average speed, the length of one step and the route travelled. In the latter case, you need to have your phone with you, as the Mi Smart Band 5 has no built-in GPS sensor. The gadget will warn you when your heart rate exceeds a critical value - it is set individually in the settings.

There is also a new parameter: Personal Vital Index (PAI). This is calculated on the basis of your gender, age, heart rate and other information. The built-in help recommends aiming for a value of 100 - to maintain optimum physical fitness.

There are also innovations aimed at a female audience: tracking your menstrual cycle and timing your ovulation. In addition, the Five has pumped up heart rate measurement and sleep monitoring. The accuracy of such calculations, thanks to redesigned algorithms and improved sensors, has increased by almost 40%.

The fifth generation Mi Smart Band can be called a proper upgrade. The capabilities of the accessory, despite the similar design to its predecessor, have significantly expanded. At the same time, the gadget is still inexpensive. Owners of previous versions of the bracelet should also take a closer look at the Mi Smart Band 5. Even owners of the "four" are interested: in addition to new functions, they are prepared for them a larger display, a convenient recharging system and increased accuracy of built-in sensors.